On Thursday, May 28th I experienced the most joyous chaos at a parade for the high school graduates. I believe the official term is "defilare promotia", but I could be wrong. The graduates parade through town with flower crowns and balloons, making their way from the citadel to each of the four high schools scattered throughout town. Originally, I thought this was something that happened all over Romania, but my understanding is that it's specific to Sighisoara. It's quite the spectacle. It felt like EVERYONE in the entire town came to the center for this event. I think it felt that way because everyone in the entire town was present. 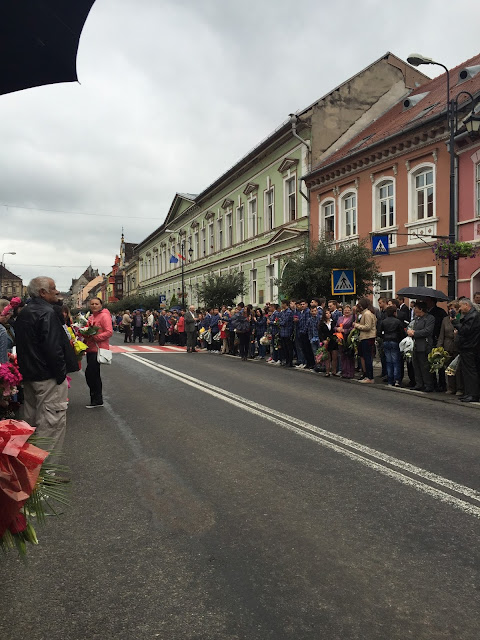 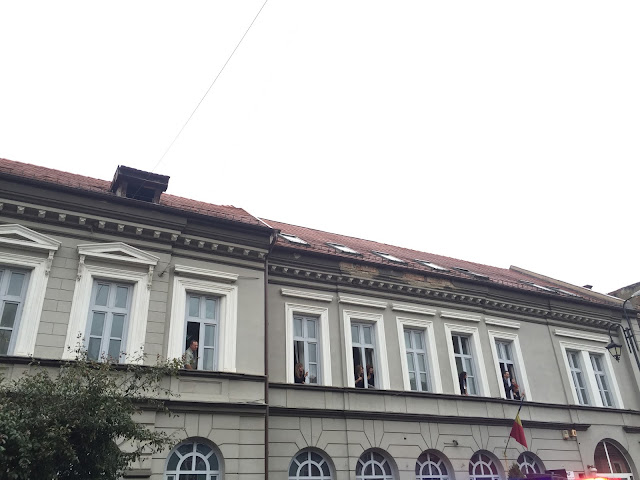 This picture isn't the best, but it makes me laugh. These people had the best seats in town. I would have loved to get an overview of the parade, but I can't complain since I was in the midst of the chaos. Allow me to explain...As a graduate, you pass out a type of graduation announcement card to your family and friends. There's a Romanian word for this card, as graduation announcement isn't very accurate, but that's an easy comparison for the purpose of explaining. Anyways, if you are a recipient of one of these cards, you must bring a flower to that graduate and give it to them during the parade. Here's where it starts to get complicated...in a good way. 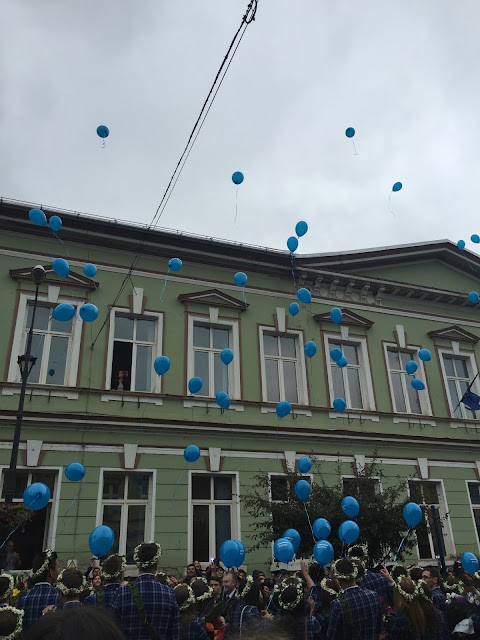 I went to the parade with my coworker and friend, Adela. She works for Veritas as the coordinator of educational programs, as well being very involved in her church. Basically, she knows a lot of people. Whenever I walk through town with her, she's always saying hello to someone. It's fun. Anyways, she received 12 of the graduation announcements, which meant that she needed to bring 12 flowers and pass them out during the parade. The graduates stop in front of each of the 4 schools and then the chaos ensues. People run INTO the parade to find the graduate(s) they need to present a flower to. It was madness, but amazing madness. Adela and I were maneuvering through the crowds of people trying to find all 12 of the graduates. I wish I had recorded this because it would be entertaining. Once you find the graduate, you congratulate him/her and present the flower...and on to find the next one! A photo I wish I could have taken, the graduates walking around with their arms FULL of flowers at the end. I am not exaggerating when I say that some of them probably had 30+ flowers. Such a fun event to attend.

As I started to write this post, I realized that I have ZERO photos from Monday Night Supper. It's one of those events where you don't ever really get your phone/camera out because the time with others is just so good. I decided to choose a photo of tea because we always end the evening around the table with a cup of tea or coffee. I always choose coffee, but I like this photo of tea. You probably don't care about all of that...I apologize.

Anyways, Monday Night Supper takes place on...Monday night. Well, usually. It's been on a Tuesday the last few weeks. Crazy days here in Sighisoara. The dinner takes place at Dorothy's house. In case I haven't already shared...Dorothy is a visionary, to say the least. She is the founding director for both Veritas and the Romanian Studies Program. She has lived in Romania for over 20 years, and lives in the most gorgeous home in the citadel.

That takes care of the where and when. Now for who...any and all expats are invited. When I first arrived, Monday Night Supper consisted of a young German couple, another couple consisting of an American (from Wisconsin) and Englishman, two American Nazarene missionaries, an American student, an American volunteer with Veritas, and our host from Scotland. Oh and me! The "who" changes pretty often as various visitors, students, volunteers, missionaries, etc. come and go. This week, there were six American students, two American professors and their spouses, two Scottish women, and two American Nazarene missionaries. It was a FULL dining room.

The meals vary as everyone takes turns cooking. There are conversations aplenty, and it's truly a relaxing time. I've found myself looking forward to Mondays, which is very unusual for me. I have yet to cook for Monday Night Supper, which isn't surprising to those who know me well. I am extremely intimidated by the idea of having to cook for more than four people...and in someone else's kitchen. I'm sure I'll end up doing it sooner rather than later, but I'll be a nervous wreck the entire time. SUPER simple recipes designed for large groups welcome!

The evening always ends with the same question, "How can we pray for you this week?" We go around the table and share something that the group can pray for, followed by prayer. I enjoy sharing, but also listening, from week to week to see how God has answered these prayers.

The obviousness of my next statement is well, obvious, but I am an introvert through and through. However, I've come to love and value the community at Monday Night Supper, but also in the Romanian culture in general. It's so easy to just go home after work and spend the evening alone, but I find myself greatly enjoying the evenings spent with others. Who am I?!


So maybe I wasn't cut out for this blogging thing...considering it's almost been a month since I last updated. Oops. To say that I've been busy would be an understatement. But honestly, I can't complain. Sometimes I get super busy and super stressed, but lately I've just been super busy and not super stressed. Remember that post about peace...it's continuing. I think I posted about this before, but I have yet to have a "normal" week. I've come to find that "normal" doesn't really exist though, and that's okay.

Since we last spoke (or since you last read?), I moved! I absolutely loved my host family, but there was an opportunity that came along and I really couldn't pass it up. There's a couple who have been volunteering here in Romania for a number of years, and they are currently taking some time to relax in Scotland. They didn't want to leave their apartment empty so they asked me to move in! This also allowed for my host family to host two of the six students who arrived about two weeks ago. Good timing all around. The apartment is in the home of an older lady who I am absolutely fascinated by! I haven't had much time to chat with her, but I'm looking forward to sitting with her in the garden and chatting about life. Or attempting to chat I should say...she speaks German and Romanian.

Speaking of Romanian, the language is coming along. Slowly. Am curs de romana marti, miercuri si joi dimineata (without all of the special letters)...I have Romanian class on Tuesday, Wednesday and Thursday morning. My teacher, Elena, is fabulous and does a great job of encouraging me. Some classes are easier than others, but I'm definitely learning! It's much easier for me to understand than to speak. Prayers would be appreciated in this area...that I would continue to improve and feel comfortable speaking.

Today was full of adventure, but I'm going to save that information for another post...in the very near future. I promise.