Today was a very special day. It was one of those days where my two worlds collided. My pre-Romania world collided with my current Romania world, and it's always such an incredible feeling. Allow me to give you some background info...

For as long as I can remember, I have loved giving gifts. It's probably one of my top love languages. Anyways, in the last ten-ish years, I have tried to seek out gifts that give back, which gets easier as that concept gets more popular. In one of my Google searches about 5 or so years ago, I stumbled upon a company called Roma Boots, which has a "buy one, give one" business model. They sell rain boots (really cute rain boots) and with every sale, they give a pair to a child in need. Now, while I've never bought a pair, this company has been on my radar for awhile...specifically pre-Romania as I mentioned before. I'd strongly encourage you to learn more about this incredible company and it's Romanian founder, Samuel Bistrian on their website, but also here and here.

When I first discovered the company, I'm sure I would have read about the founder being from Romania, but I guess it didn't stand out to me as much then. Now, it obviously means a lot more. That, and the fact that I've been to/worked in the types of villages where Roma Boots typically donates their boots on what they call "boot drops". They do these boot drops all over the world, specifically in 25 countries, but Romania holds a special in the founder's heart...obviously.

About a year ago, Roma Boots came back on my radar somehow, and I decided to inquire about a boot donation for the kids in the Veritas Kids' Club and kindergarten. I talked to Veritas staff members, completed the appropriate forms, and sent lots and lots of emails to a woman named Megan, Roma's foundation coordinator. There were lots of details to sort out, but that's to be expected when you're organizing a donation of 100+ boots halfway around the world.

I'm saying this again, but my two worlds collided today when the Roma Boots founder, Samuel Bistrian and Megan came to do a boot drop at Veritas!!! We sat and talked a bit when they first arrived, to help them better understand the history and work of Veritas, before unloading the boots from their car. Adela, three of the teens from our It Takes Courage 2.0 group, and one of my Romanian Studies Program students helped to unload, organize, and distribute the boots. We organized the boots by size in our large meeting space, and then brought the kids into the room, five at a time. We asked their shoe size and then grabbed a pair to try before sending them away with a pair. We held the boots up to their shoes at first, and then, if it looked okay, made them try the boots on to ensure a good fit. We made sure the boots had some wiggle room since their feet grow so fast! We put their shoes in the bags that the boots came in and sent them back into Kids' Club. Once everyone had a pair, we took a group photo and spent some time with the kids.

Before bringing the kids in, Samuel asked if he could say a few words in the Kids' Club space where the kids were doing their homework. I couldn't help but get a little teary-eyed as he introduced himself and explained why he had come back to Romania. The very first thing he said was that he lives in America, but was born in one of the most beautiful countries in the world...Romania. With so many people leaving Romania, to work and live in other countries, this was a very intentional statement for him to make. I might have to write a whole blog post on that topic at another time.


He talked about growing up in Romania and wearing hand-me-down rain boots from his siblings, as he is one of twelve children. He spoke to them as if he knew them, and I think it's safe to say that he definitely understands certain aspects of their lives as someone who also grew up in Romania. He spoke to them with purpose and with a strong belief of how valuable each and every one of them are. I think this hit me hard because I so strongly believe that as well. These children are so insanely precious, but not many of them believe that about themselves. Again, I have lots of emotions about all of this... 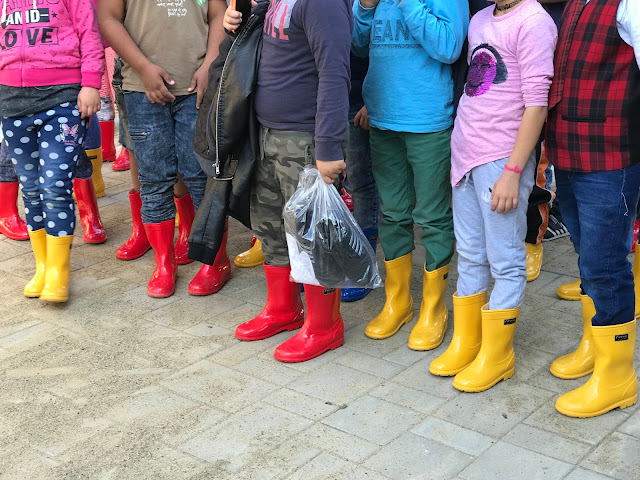 Samuel also explained the reason behind the name Roma, which is amor spelled backwards and means love, as most of us know. He shared this with the group, but then reminded each child of this as they tried on and received their boots. One of the reasons why I, personally, think it was so important for him to make this definition clear is because Roma is another term (a more politically correct term) for gypsy. To give these children, many of who come from marginalized Roma families, a new definition of that word is powerful. I see hope in adding, and intentionally associating, love with their definition of that word.