An August in Sighisoara

So this is my first August spent in Sighisoara. The last two were spent in the States visiting family and friends, raising support, recruiting RSP students, etc. Since I went home in May for my sister's wedding, combined with a handful of other reasons, here I am, in Sighisoara in August.

Veritas, the organization I work closely with, takes a pause from all of it's programs during the month of August. With this, most of the staff save up their vacation days from the year and take August (or most of it, at least) as vacation time. There are one or two people working every day, but the center itself is basically closed. Now even though things are pretty quiet around Veritas, I still have plenty of things to do. A lot of these "things" are things I never got around to doing during my crazy season, which is how I lovingly refer to January-July 2017. All of this to say, yes, I'm still working in August. Granted, I'm able to work from home (in my pajamas with a cup of coffee and a messy top knot!) and at a slower pace on my to-do list that never ends.

This slower pace allows me to read, listen, reflect, journal, etc., which is something that I've definitely been putting off for...maybe a year? Yikes.

It's like I'm trying to fit in all of the reading I don't make time for during my "normal" schedule. I have to stop to explain why I put "I don't make time for" in italics. Usually, I would say that "I don't have time", but that's a stupid excuse that I use FAR too often. The truth is that I simply don't make time. I sit and look at my phone for hours, or take really long naps, but I don't make time to read, listen, reflect, journal, etc. Okay, back to the main topic...

I always have really good intentions to read, but I never get around to it. One problem is that during the time of my "normal" schedule, I sit down to read and fall asleep. Every single time, without fail. Even if the book is exciting. Even if I don't feel that tired. Nope, I fall asleep.

One thing I think many of us are working on in the days of "busy" is trying to take time to pause, to breath, to reflect. I'm terrible at this. I feel guilty when I do this. I sometimes don't feel like I deserve to pause, like there's always something else that I actually should be doing. I feel like I wasn't sent to Romania to sit and pause and do something for myself. But then my social worker self smacks me and yells "SELF CARE!" in my face...and I come back to reality. I mean, I teach a whole class to my students on self care and avoiding burnout, and yet, I struggle to put it into practice. But not this August!

I wish I could tell you how many words I have been able to listen to and read over the last week, since returning from my two week Romanian course. Books, articles, interviews, podcasts, lists, etc. A lot of words (and some in Romanian!). I currently have 10 tabs open with articles, online magazines, interviews, etc. If you know me, you know it isn't abnormal for me to have at least 15-20 tabs open at a time. But this time, most of them are for the purpose of self care!

So maybe you've read this far and realized, or are reminded, that you also need to take time to pause, to breath, to reflect. Stop and take the time. Pick up that book you've been wanting to read. Write a few sentences in your journal. Mail a card to a friend. Make a really good cup of coffee. Go for a walk. Whatever self care means to you, do it. Even if it's just five minutes. Everyone has five minutes to spare. And if you need to get away, I have a guest room and a lovely balcony for you to use :)
Posted by Casey at 4:12 AM No comments:

If we were having coffee...v3

You know the drill! Grab your favorite mug full of coffee (or tea, if you'd prefer) and let's chat! I'm feeling wordy so prepare yourselves...

If we were having coffee...I'd probably speak to you in Romanian a little bit because I just spent two weeks away, in the lovely city of Sibiu, taking a rather intense Romanian course. When I first came to Romania, I took Romanian classes with a teacher through Veritas for probably 4-6 months. She ended up moving and I took a break for a little while before taking classes with my pal and coworker, Adela. We used a book and tried to focus more on conversation since speaking has always been my lowest area of language learning. After a few months, we ended up stopping due to schedules, a trip back to the States, etc. All of that to say, I haven't taken classes in awhile and I've had lots of opportunities to speak in English with Romanian Studies Program students, volunteers, teens in the It Takes Courage programs and at English camp, etc. I think you get the idea...I kind of stopped speaking Romanian, although not intentionally, as it just kind of happened that way.

Anyways, I decided to seek out some type of course since I'd be sticking around for the summer with a less intense schedule. I found a handful of options on the internet, but decided to go with a two week intensive type course in Sibiu, which is about 1.5-2 hours away by car. I became aware of a friend of a friend who was willing to host me, and she was fabulous. So hospitable and generous with her time and resources. I really enjoyed my time in her home, even though I wasn't around very often due to my class schedule and studying habits. She ended up going out of town so I did have to book a room for the last few days, but that worked out fine. I found a cute, traditionally decorated apartment close to the center of town. 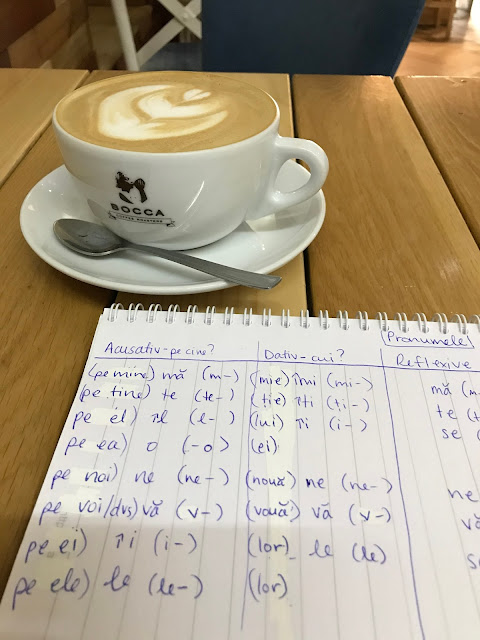 The class was intense, to say the least. After the first day, I wondered if this was such a good idea after all. We started with some serious grammar and I freaked out a bit, but it got better over time. Well, I don't know if it got better so much as that we got used to it. We had class every day from 9:30-12:30, and then twice a week we had a more casual "Immersion Course" from 3:00-5:00. There were about 12 people in my B1 level section, but then there three other sections (A1 with 2 groups, A2 and B2) with about 40 people total I think. On both Wednesday evenings, we had a "social party", which really just meant dinner out together with everyone. Not my favorite type of event, as you know, but I powered through. Thankfully, there was a young woman in my class who I got along with really well so it was a good chance to talk to her a bit more.

Beforehand, I really didn't know what to expect as far as who else would be taking the class, but let me tell you, it was a diverse group! In my level alone, there were people from Austria (3), Germany (2), France (but living in Belgium), Poland, Brazil, Norway (but mostly living in Kenya), England (3, with one living in Holland)...and I think that's it. See what I mean...diversity! It was really interested to hear what everyone does and why they were learning Romanian. 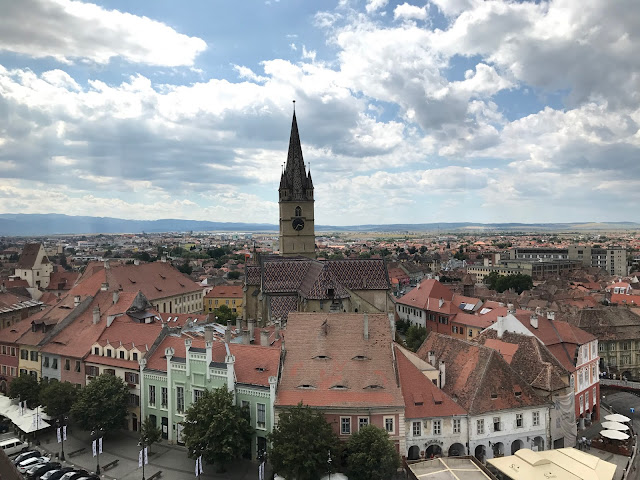 If we were having coffee...I'd tell you how much I absolutely loved spending two weeks in Sibiu. I had been there a handful of times in the past, taking students to see the sites and such, but I hadn't spent more than a day there at a time. I didn't have as much time as I would have liked to explore and do more tourist-y types of things, but I tried to take the time to walk around. I would try to walk to/from class a different way, and then I spent most of Saturday roaming around. 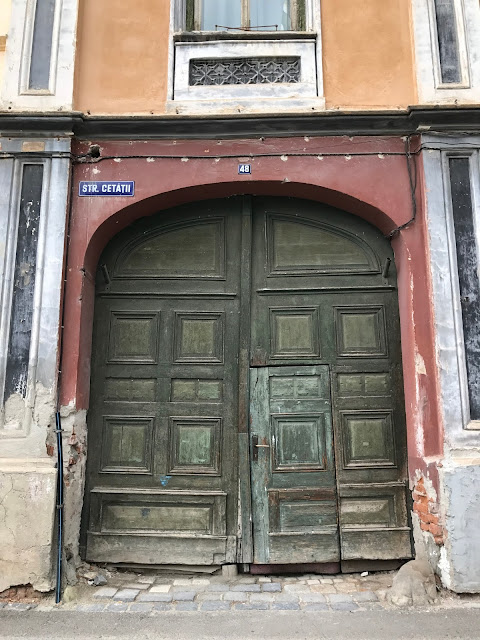 I also visited a number of coffee shops...to study, duh. My two favorites were The Refresh, which I had been to on previous trips, but they have a double caramel cappuccino (with an extra shot) that is soooo good. My other favorite (probably my most favorite) was Hug the Mug. A super cute, yet small, coffee shop along the main street in the center of town. They just had really good coffee, and I visited them specifically for ice coffee. So tasty and refreshing. There were also billions of doors in Sibiu and every single one of them was GORGEOUS. I couldn't have begun to photograph them all.

If we were having coffee...I'd probably end up talking about podcasts, as I've been listening to them nonstop for awhile now. I had been listening to an audiobook before bed, but once that ended I felt like I needed something else. I wasn't up for another book because it was too hard to figure out where I had drifted off the night before when I went to listen the next day. Jen Hatmaker had started a new podcast so I decided to follow along with hers, and that lead me to Shauna Niequist's podcast...and then to Annie F. Downs' podcast. I'm waiting for Jen's next episode, finished Shauna's 8 episodes from this season, and thankfully Annie has had a podcast since 2014 so I'm set for quite awhile. Thanks to these lovely ladies and their guests, I have new books to read, music to listen to, movies to see, things to think about, etc. So much good stuff. I'd highly recommend each of these podcasts if you're looking for one. And I'm open to podcasts recommendations so let me know what your favorites are! 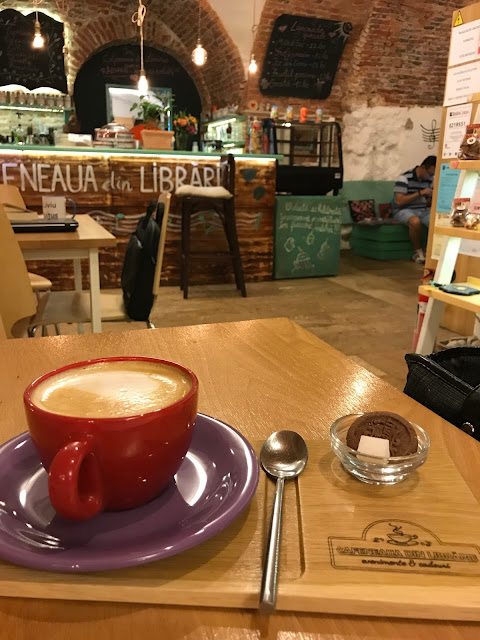 If we were having coffee...I'd obviously ask you about your life. So feel free to let me know what you're loving in life right now. Books, movies, podcasts, coffee, super simple recipes...I'm interested in all of it. Email, text, Facebook, old fashioned snail mail, etc. I'd love to hear from you.
Posted by Casey at 1:27 PM No comments: