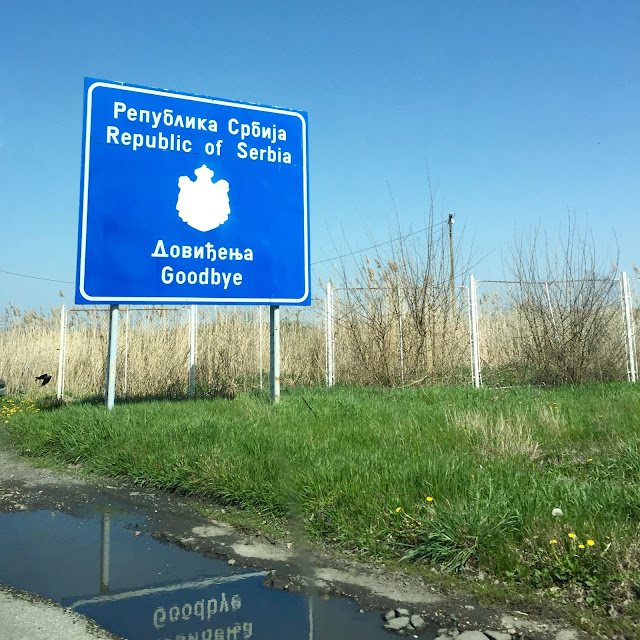 For the month of April, I decided to reflect every single day on one moment from my experience meeting and serving some of the most beautiful people. The small, daily reflections have made it easier for me to share pieces of my experience with others, but also to allow myself to process through things. I have been posting these reflections on one of my social media accounts, but I've decided to share some of them on here too. There is no flow from day to day, and typically that would bother me, but I think it's better that way. So without further ado, here are those random reflections... 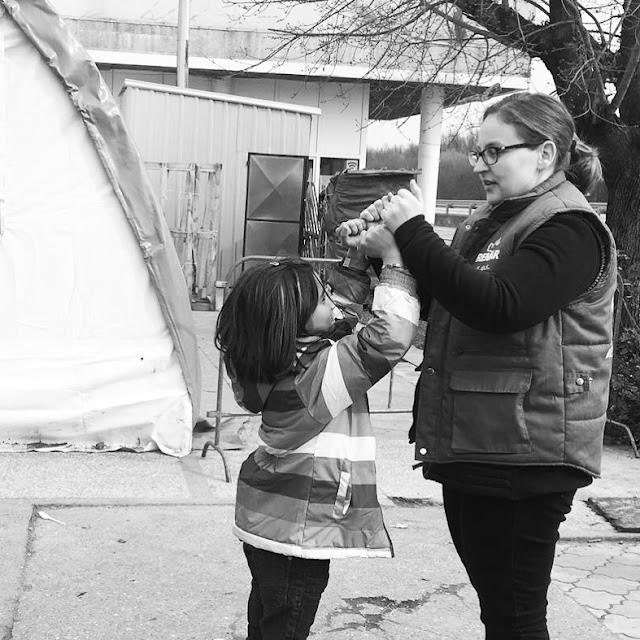 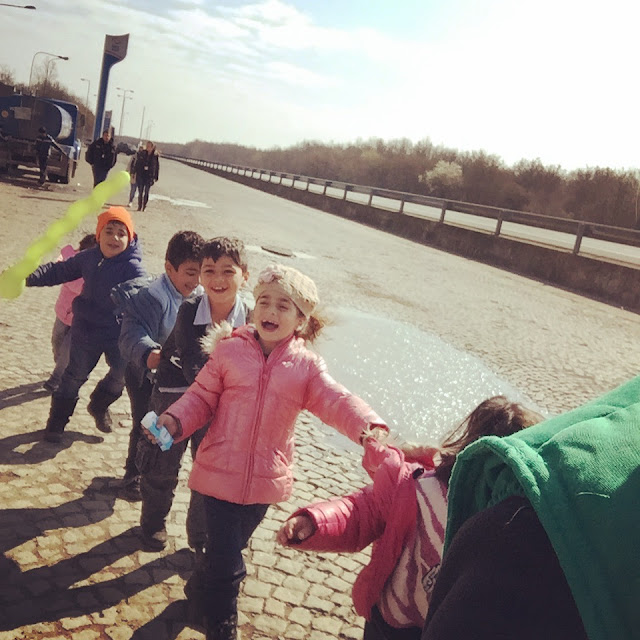 In March, my emotions were all over the place, with extreme joy and extreme frustration as the primary ones. I feel privileged to have been able to share in some of the joys and frustrations of the beautiful people I formed relationships with. [04.05.16] 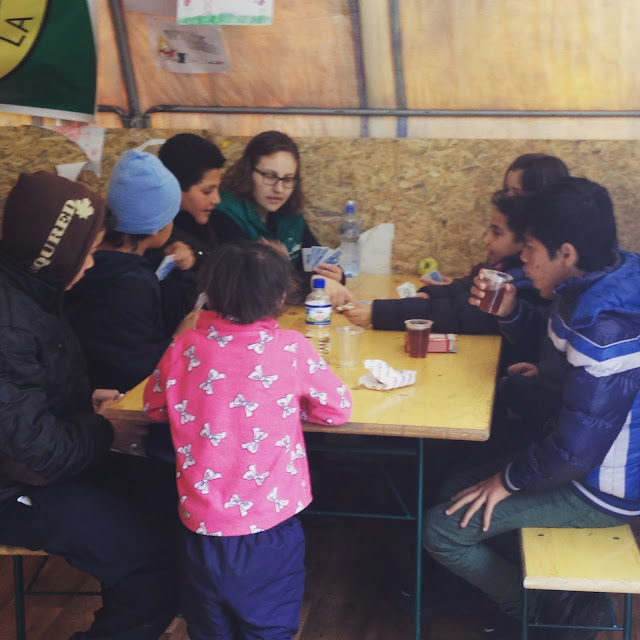 A typical sight at the camp...a table of kids and me. Even though only two of these kids remain at the camp, I'm constantly thinking, "Who is playing Uno with them, who is paying attention to them, who is listening to them...?" I'm not there, but He is. God is there with them whether they know/believe/understand it or not. This reminder is the only way I can sleep at night. [04.06.16] 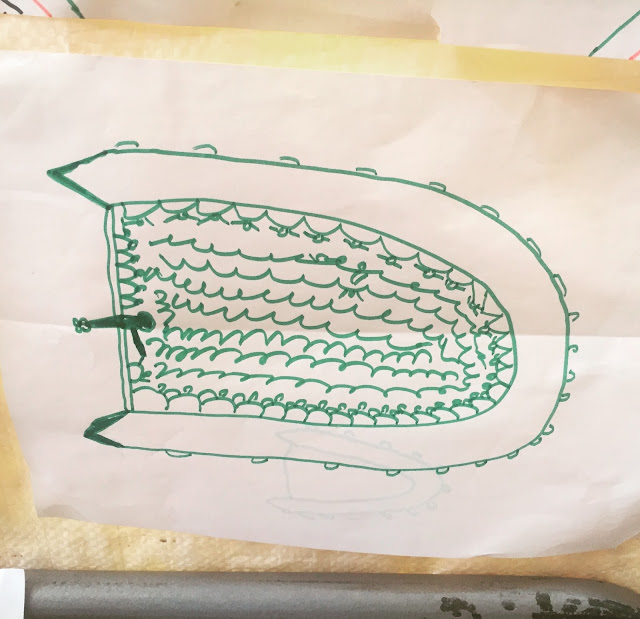 One day, I asked a young man, who I had started to build a relationship with, to tell me about his journey. He showed me video footage on his phone of his boat ride from Turkey to Greece.

I had this feeling while watching, but I couldn't recognize it at first. Then, I realized that it was guilt. I felt guilty for watching something so intense and so seemingly personal, despite the fact that he shared it freely.

I have no idea what these lovely people have been through, and I don't think I'll ever fully understand all of it. But I'm realizing that that's okay. What I can do is share their stories and my experience, like he shared his with me. And I will do just that. [04.07.16] 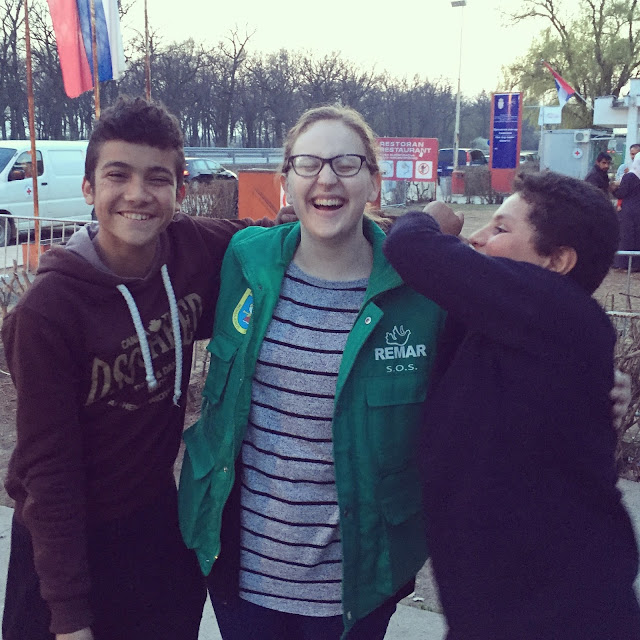 Not the most flattering photo, but I don't even care. These are two of "my boys" who made me smile every single day.

It's so incredible to me how such a bond can be formed between people who don't share a language. Just the effort to communicate can go along way, even if it's not very successful. 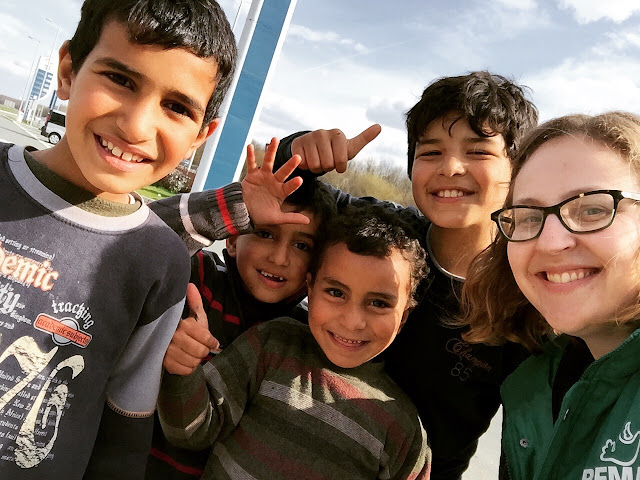 Like coming to Romania, I felt such a peace about going to work with the refugees. I'd never met a refugee/person in this type of situation before. I don't think I'd ever sat down and talked with a Muslim. I had no "training" per se.

And yet, it all felt so natural. It felt like something I was always meant to be doing. That doesn't mean it wasn't hard. It was. It still is. There were days when I went into the supply closet and cried. There are days now when I just sit on my bed and cry. 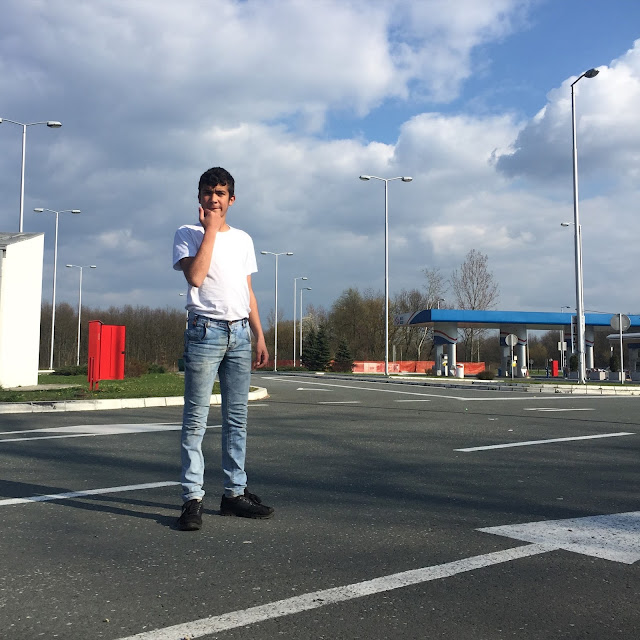 I think about this young man every day. He is one of "my boys" that I mentioned the other day. He is kind, mature, a good friend, and caring towards others, but especially his family. He was one of the first faces I saw each morning as he came to get the food bags for his family.

One morning, he wasn't acting like his usual self. I asked him if he was leaving that day, and he said yes. This usually confident and mature young man suddenly looked a lot younger. I can only imagine what was going through his mind as they prepared to continue on their journey.

His departure was hard. We hugged. I told him I'd miss him. The look in his eyes is one I'll never forget. I said goodbye to the rest of his family and watched as they walked towards the taxis parked at the gas station. And then I went into the supply closet and cried. I miss this boy and his sweet, smiling face so, so much. [04.10.16] 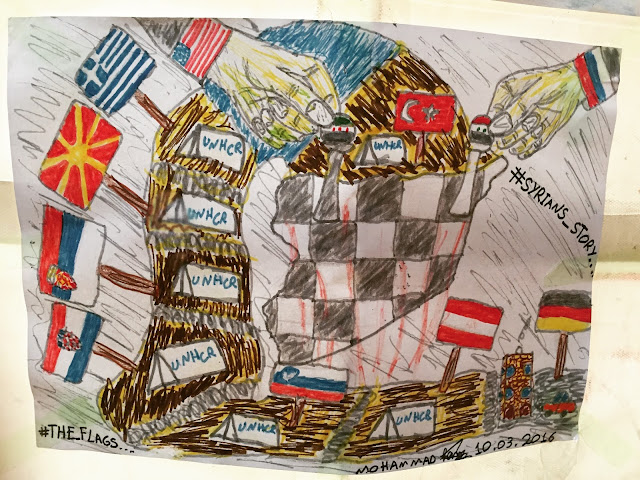 I almost made it through the day without crying, and then someone says a prayer for the refugees and I can't handle it.

Yesterday, the police used tear gas on the refugees at the Greece-Macedonia border. This immediately makes me think of a group I refer to as my "tea party ladies". I helped bring tea to their room one time and ended up being invited in to drink tea and talk, but most listen, for about an hour. I had two tea parties while I was at the camp.

One of the times, they told me about their journeys and how they too had experienced the tear gas at that same border. These women were so lovely and welcoming and kind...inviting me into their world so willingly. I can only hope that they are treated with dignity and respect as they continue on their journey. [04.11.16] 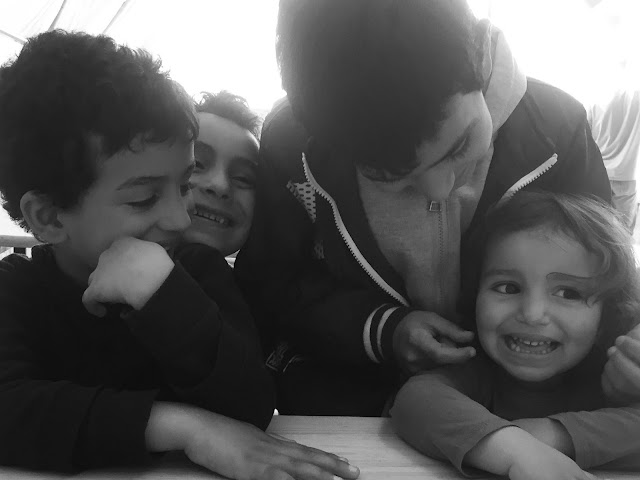 Today, I told my Romanian kids about my Syrian kids. My two worlds collided. Most of my Romanian kids listened intently as I told them about the refugees, and some asked questions about their homes, schools, journeys, etc.

I can only hope that a seed was planted in their hearts to always see the best in others and to show love in all situations. [04.12.16] 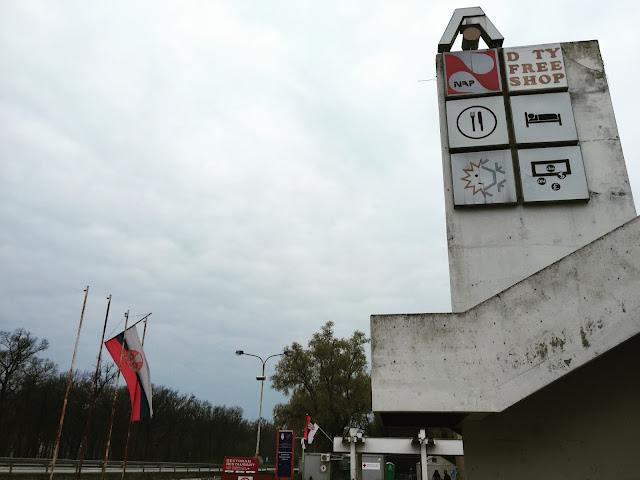 Bleak, dreary, dismal, hopeless. This is how I would describe the camp as an outsider looking in.

Hopeful, encouraging, beautiful, friendship. This is what I saw and felt as an insider in the camp. [04.13.16]

I watch this video every single day. These two boys hold such a special place in my heart, and were part of "my family" at the camp.

The one of the left is hilarious and helpful. The one on the right is sweet, kind, and independent.

They send me voice messages almost every day and it makes my heart burst. [04.14.16] 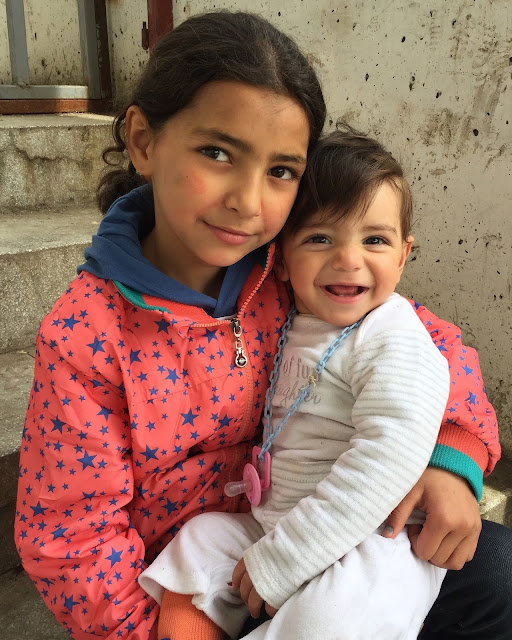 At the halfway point of these reflections, I'd like to share something extra special. This is my second favorite photo from my time in Serbia.

These two are the other half of the children in "my family". She is as sweet as can be, and the best older sister to her baby brother. He is also the sweetest thing with such a calm and easygoing temperament.

This family remains in Serbia, as one of the last families at the camp. I hope and pray that they are moved to a more stable environment as soon as possible. [04.15.16]

And there you have it. Half of the month's reflections. It's funny because no matter how much I share, I feel like I'll never even scratch the surface of truly saying how much this experience impacted me.
Posted by Casey at 5:47 AM No comments:

Sitting here...with this blog post open...not knowing exactly what to write. How do I share such a life-changing, eye-opening, earth-shattering experience in a blog post? I think the answer that I need to accept is "I cannot". I'll write some thoughts now...and some thoughts later...and probably some thoughts in another year. That's what I can do.

On Monday evenings, a bunch of ex-pats gather for what we call Monday Night Supper (MNS). I know I've blogged about this event before so I won't explain much further. This past Monday was my first full day back and my first MNS since we returned to Romania on Sunday evening. I was nervous about going and having to answer the overwhelming question of "so...how was it?" I shouldn't have been so nervous because this is a group of people who truly care and understand this type of work. I actually ended up being nervous because I knew I was being listened to so intently. It was silent around the table as I shared parts of my experience. I am thankful to have had MNS as my first experience of answering that overwhelming question.

So how did I answer that overwhelming question...? Good question. I wish I had recorded myself because I answered it pretty well...and now I can't remember what I said. Typical. I know I used all of the cliche words like life-changing, eye-opening, challenging, amazing, frustrating, lovely, etc. Cliche or not, these are the words that I had/have at the moment.

As many of you know, I was sick with various ailments (bronchitis, pink eye, flu, cold, etc.) during our time in Croatia and Serbia. There were a lot of days when I went to the camp, came home, napped, ate supper, went to bed, woke up...repeat, which didn't allow me to process everything that I was experiencing. I was aware of this as I returned to Romania, but that hasn't made it any easier. I've already had some difficult moments since returning.

I think about the refugees, who I now call my friends, all day long. I miss them so much, so deeply, so unlike anything I've ever experienced before. These beautiful people gave me so much and taught me more about life, God, serving others, myself...than I ever expected.

There are so many moments...faces...stories...conversations. I want to process them and share them you, but it's going to take time. I appreciate your patience. Please feel free to ask questions or email me or whatever. I want to talk about it. I love talking about it even though it's hard. Just know that I met some of the most beautiful, kind, resilient, courageous people. I served in the simplest ways at times, whether serving tea or sweeping crumbs off of the floor, but it was in those moments that I learned a lot.

I'm thankful to have found articles and quotes from others who have been able to put their thoughts and feelings into words. I hope their words will help you to get a better idea of how I feel since I don't have my own words just yet.

First and foremost, please watch THE VIDEO below. Nazarene Compassionate Ministries released it about a week ago. All of the images are from the two camps I worked at in Croatia and Serbia. It is so incredibly well done.

One of the two men who worked on that video also wrote a five-part photo essay, which is incredible. Again, all of the images and stories come from the two camps I worked at in Croatia and Serbia. Read each part here: PART 1, PART 2, PART 3, PART 4, PART 5. As I posted these articles on Facebook, I shared some of the quotes that really moved me. Here is one more that I think is worth highlighting...

I think it's easy to separate ourselves from what's happening out here.

So let's start seeing it as such.

And let's start responding as such."

"Hope is hope when it seems impossible, when it takes a bit of faith to believe it's possible...

I'm beginning to think that, like hope, all virtues are true virtues only when they are really difficult. Hospitality is only truly hospitality when it's inconvenient. Courage is only courage when there is real fear involved. And love is truly love when it's hard...

And yet, from refugee to worker, and worker to refugee, there is love present. A hard love, a jagged love, one that shows its wear. It's why the embraces are so powerful and the tears so heavy. The chests heave with emotion, and the arms hold tighter than you would expect from a stranger.

They've been hard fought for here. And I'm understanding them better because of it."